If you know the histology that gives rise to a particular dermatoscopic structure then you can logically work out the possible differential diagnoses of  any pattern you see. 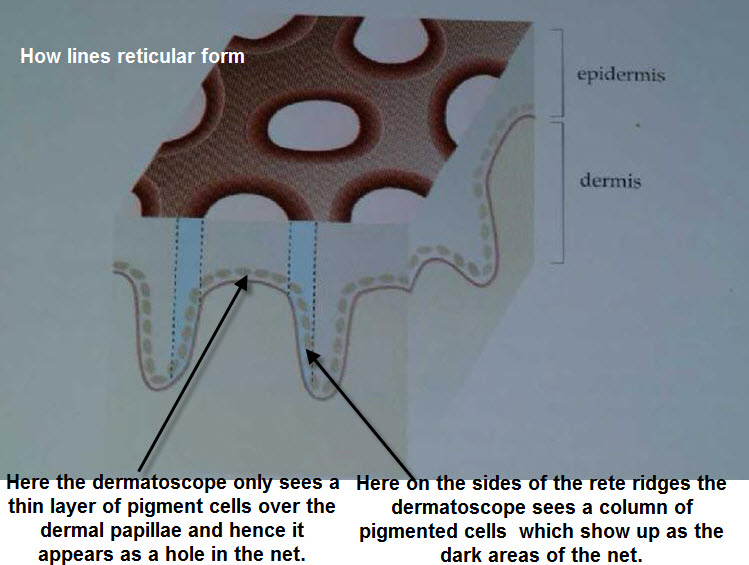 Network (Lines Reticular)
This image shows how a reticular network occurs on areas of the skin where the rete ridges are prominent. When the epidermis flattens out then the rete disappear and the ability to form a reticular network goes with it. That happens to some extent on the face as we age. Hence the "network" you see on facial lesions in the elderly is simply due to the openings of hair follicles with pigment in the surrounding keratinocytes. Hence a flat seb k on the face can have this type of network as can a simple lentigo made up of pigmented keratinocytes without any real increase in melanocytes. Hence presence of a network on the face does not mean a lesion is melanocytic. Also even increased pigment in keratinocytes can arrange itself such that a broken network can occur in Seb Ks, Pigmented SCC in situ.


Lets now look at various dermatoscopic structures and what they represent histologically.

eg Dots - Grey or Blue represent melanin in melanophages or melanin in cells in the dermis. So your differentials are LPLK, Pig BCC, Melanoma, Nevus, and if the epidermis is thick enough melanin in keratinocytes in the epidermis may appear as grey or blue dots in Pig AKs and Pig IEC

Dots - Black - represents melanin in cells or extruded free melanin high in the epidermis- So they are seen in Pagetoid melanoma, Reed nevus, Spitz nevus, Pig AK and Pig IEC

Dots - White- these are milia, keratinised cysts in the epidermis. They can be seen in Melanoma, Congen Nevi, Seb k, BCC and Trichoepitheliomas

Circles - Circles are mainly seen when looking at the openings of hair follicles or eccrine glands.

White Circles- The infundibulum of the hair follicle may have excess keratin giving a white plug (clod) or a circle. This corresponds to the thickened keratinising epidermis in Solar keratoses or IEC and in some invasive SCCs. White circles are also seen in some inflammatory skin diseaeses such as discoid lupus erythematosus, lichen sclerosus and pityriasis rubra pilaris.

Grey or sometimes Black Circles are due to pigment in either the epidermal lining cells of the infundibulum in LPLK, pigmented solar keratoses or pigmented IEC or increased melanocytes as in lentigo maligna.

Clods  Clods are of various colours. Red and purple are vascular, Black can also be a thrombosed vascular leion but also melanocytic or seb k.

Clods White - Can be keratin in milia or in follicles in actinic keratoses or SCCs but also Mollusca, Trichoepitheliomas and Adnexal tumours such as Pilomatricomas. Sebaceous tumours can have more white than yellow clods and an accessory nipple can deceive sometimes. Remember white clods (milia) can be seen in Melanoma and Congenital nevi and BCCs.

Clods Black - Peripheral in a melanoma and central in a Clark nevus, Some Seb ks and thrombosed hemangiomas or angiokeratomas


Structureless- Least specific of any of the patterns in Dermatoscopy. It is difficult to define the histological correlate! However a white peripheral structureless area around a pigmented lesion is a marker for melanoma. Pink structureless may be an amelanotic melanoma and Yellow , Orange or White structureless can be seen in both BCCs and Seborrhoeic keratoses.

White Lines- These are thought to be collagen as part of the scaffolding for both BCCs and Melanomas. They can also be seen in Prurigo nodules and radiating around dermatofibromas.

Polygons - These 5 or more sided figures are probably the result of regression with pigment laid down in the papillary dermis. They are seen in lentigo maligna and lentiginous melanomas on the back, LPLKs and in some regressing solar lentigos in chronically sun damaged skin.

Examine the lesion with a dermatoscope and then decide on the following.

More than one colour or structure (Chaos)?    If not forget it except all pink lesions, or benign looking new  nevoid lesions in elderly,

If  chaotic  then any of the 10 signs of melanoma. See Link Opposite

If pink lesion any other structures to help diagnose it e.g. vessels, white lines

Any dermatoscopic features of BCC or SCC ?

Any other distinctive dermatoscopic pictures? You learn these by exposure to them on a website like this.

Now lets look at adding different histologies to the above image and work out what the dermatoscopy should look like.

1. Add same sized nests of melanocytes along the sides of the rete ridges-  benign nevus with regular network

2. Stick large nests in the dermal papillae instead. - Negative network a marker of  possible melanoma

3. Increase the number of atypical melanocytes along the DEJ without nesting - darker network only, possible lentigo maligna

5. Have nevus cells as clumps or nests in the dermis or as strands of pigmented cells within collagen strands - Clods- brown or blue Sometimes blue dots - Nevus, Blue nevus

6. Have varying sized nests all along the DEJ - Iregularly thickened network - Clark nevus

7. Look at the histology of the various types of BCC. How do they translate dermatoscopically

8. Same approach with pigmented SCC in situ and Invasive SCCs