View this YouTube video on Dots. Click on the arrow and when it starts go to the bottom of the screen and change the 360 resolution to 1080 and then click on the box with the arrows pointing out to enlarge to full screen. These videos are recorded in high definition. Press ESC on your keyboard to return to normal size. 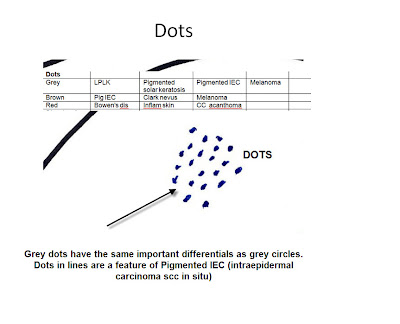 Dots can be different colours. We speak of red dots as vessels particularly in Bowen's disease, Spitz nevi and Melanoma when they are part of a polymorphous collection of vessel types, especially in nodular amelanotic melanoma. However they are also common in psoriatic plaques!

Black dots represent melanin in either melanocytes or keratinocytes usually high up in the epidermis near the stratum corneum. Hence they can be a feature of pagetoid spread in superficial melanomas.

Brown dots are usually nests of melanocytes at the dermoepidermal junction. If proliferating in the dermal papillae they can be in the centre of reticular network holes particularly in congenital nevi but often these nests are a considerable size and best described as clods. Brown dots proliferating at the periphery of a network suggest an actively growing lesion and can be seen in early  melanoma (often accompanied by pigment streaks or lines radial peripheral. Dots over the lines of the pigment network suggest nevus nests at the tips of the rete ridges where they should be in benign nevi! If all over the place it is a more chaotic lesion and suggests melanoma.
Brown dots in lines in the middle of a pigmented lesion without a definite network are a strong predictor of pigmented IEC (Intraepidermal carcinoma SCC in situ)

Grey dots represent melanin in melanophages in the dermis. They can be seen in regressing melanomas, Pigmented solar keratoses and s\Scc in situ, Lentigo maligna and LPLKs.

Grouped white dots in groups of 4 in the infundibulum of hair follicles are called rosettes and are seen in solar keratoses but are an artefact of polarised light on excess keratin in the follicular opening. 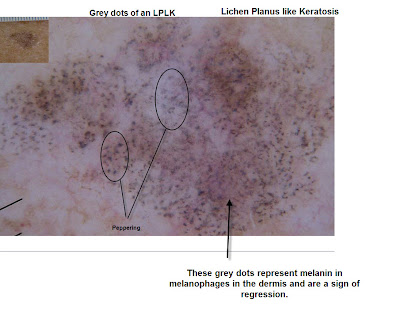 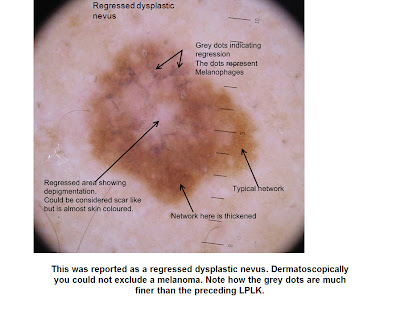 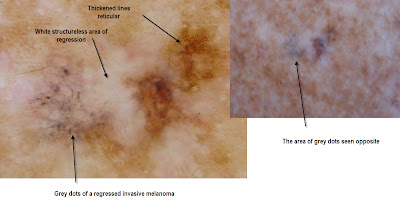 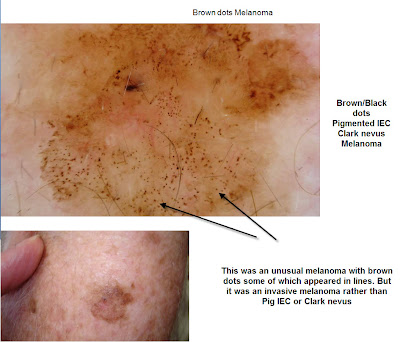 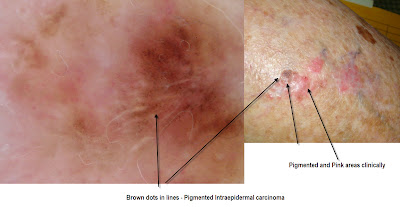 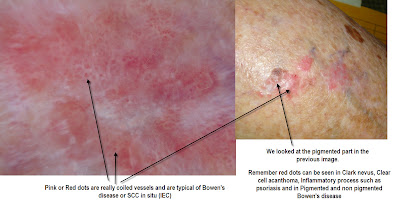 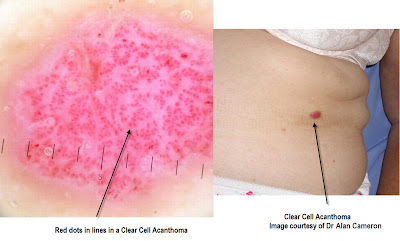